Follow A Reinvented Mom on Instagram I want to join the fun!
You are here: Home / FOOD / Lunch & Dinner / Crockpot Mississippi Pot Roast
Disclosure: This post may contain affiliate links. When you click on a link and/or make a purchase, I may be paid a small commission at no additional cost to you. Please read my Disclosure page for more information.
779shares

Calling all busy Moms! Crockpot Mississippi Pot Roast is a dream dinner – just 5 minutes of prep and you are on your way to a meal your entire family will love.

Confession time….. I struggled to make a decent roast for years. Yes, YEARS!

I admit it – I was an epic failure at pot roast. I tried different cooking methods, cuts of meat, recipes.

You name it, I probably tried it. And none of them produced a meal worthy of leftovers. 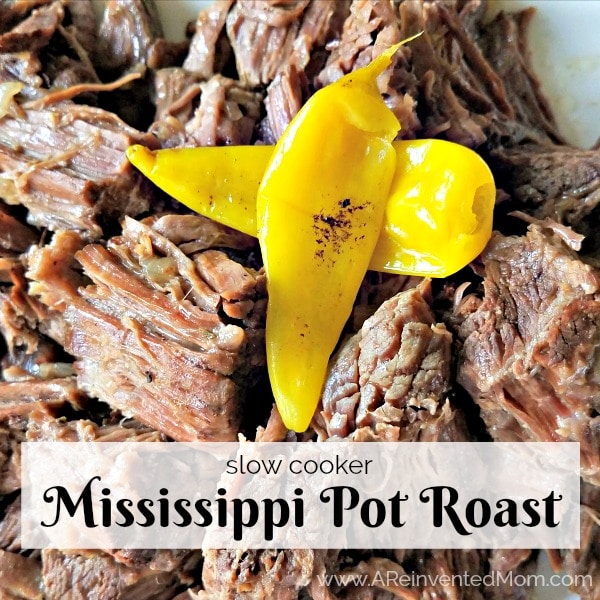 And then I found a recipe that changed my roast-making status from fail to all star – Mississippi Pot Roast. Guys, this is the roast dreams are made of.

Minimal prep time. Set and forget it in the slow cooker. Meat so tender it falls apart. And the taste – out of this world delicious!

I’m going to go out on a limb and say this recipe is “no fail”. It has turned out perfectly every time I’ve prepared it. Every. single. time.

How To Make My Version of Mississippi Pot Roast

Like most recipes, I’ve modified it over the years. Some modifications were made based on ingredients on hand.

I could never (ever!) remember to buy the Au Jus packet called for in the original recipe. So I swapped it out for beef broth.

And other alterations were based on family tastes. The Teens preferred the roast prepared with banana wax peppers rather than pepperoncini peppers. Both are good but you gotta keep your people happy. 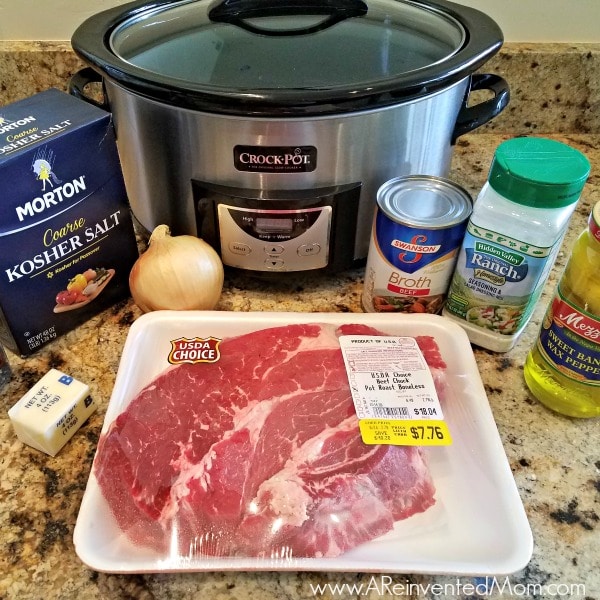 And that full stick of butter in the original recipe? I simply struggled using that much butter. So I cut the amount in half.

And you know what? It stills tastes wonderful! So, half a stick it is!

I can have this assembled in the slow cooker in about 5 minutes. Add another 10 minutes of prep time if you want to brown the roast. Which I rarely do.

All that’s left is to set the timer and let the crockpot do it’s thing. 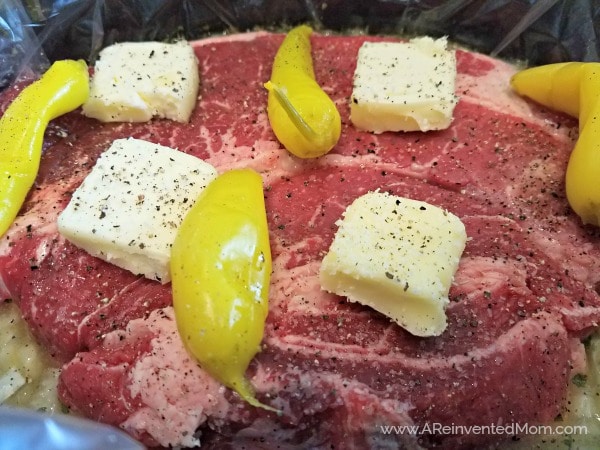 You will be rewarded with the most tender meat. In fact, the roast usually falls apart as I remove it from the slow cooker.

And the taste? You won’t believe the flavor! Out of this world. Your family will think you spent hours in the kitchen making dinner.

There’s no need to share how little effort went into making this dish. It can be our little secret.

Scroll down for a printable recipe card.

How To Serve & What To Do With The Leftovers

I like to serve Slow Cooker Mississippi Pot Roast with mashed or baked potatoes, a veggie and hot rolls. If I’m feeling ambitious, I make a simple gravy using the the cooking liquid.

The first meal I serve the pot roast in larger chunks. Leftover meat is shredded, making it easier to use in a variety of dishes.

Pro tip: Add a little cooking liquid to the leftover meat, to keep it from drying out. 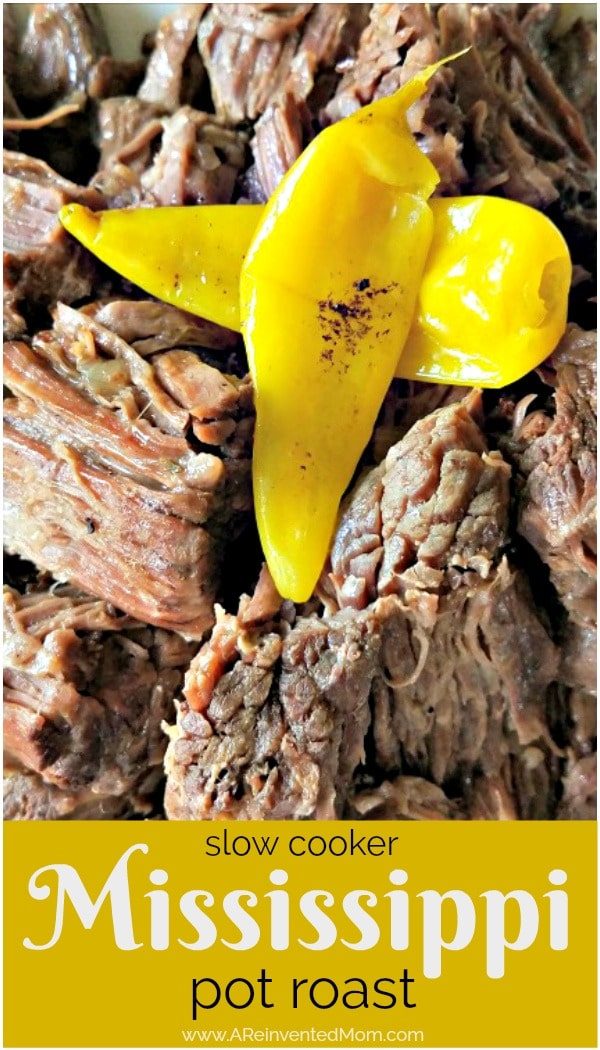 Why is it called Mississippi Pot Roast?

The New York Times even wrote an article about the origins of this amazing pot roast. How cool is that?! If you have a few minutes, it’s a fun read.

I’ll be forever grateful to Robin Chapman for creating a delectable recipe, Karen Farese for sharing the recipe in a church cookbook and 2 bloggers for posting to their sites. And the rest is internet history!

I personally think this is the best pot roast recipe in the world. Yes, it’s that good!

If you’ve never had Mississippi Pot Roast, what are you waiting for? You NEED to make one stat!

A Reinvented Mom is a participant in the Amazon Services LLC Associates Program, an affiliate advertising program designed to provide a means for sites to earn advertising fees by advertising and linking to Amazon.com. 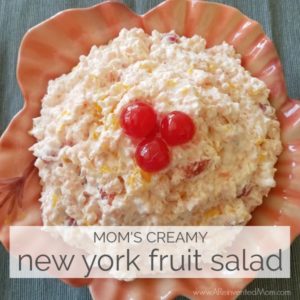 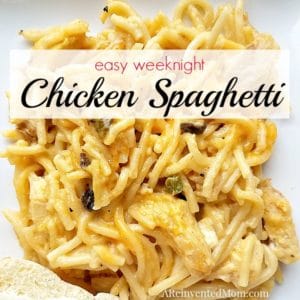 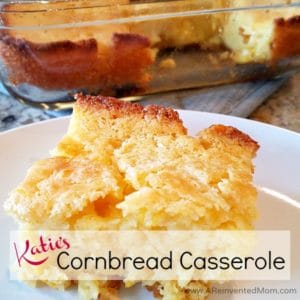 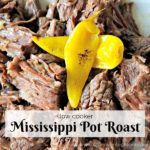 Calling all busy Moms! Slow Cooker Mississippi Pot Roast is a dream dinner - just 5 minutes of prep and you are on your way to a meal your entire family will love.

1. Brown the roast before placing in slow cooker. I rarely do this and the dish still tastes great.
2. If you need to reduce the sodium, use low sodium broth, unsalted butter and delete the kosher salt.
3. Make a gravy from the cooking liquid by skimming the fat, whisking in a cornstarch slurry and cooking until liquid has thickened.
4. Leftovers are awesome on sandwiches and quesadillas.
5. Nutritional information is provided as a reference only.

Subscribe to our Newsletter to stay up to date. You'll receive exclusive content, the latest news and occasional special offers by email.

Your information is safe & will never be shared or sold. Unsubscribe at any time.

Connect with A Reinvented Mom

We are a participant in the Amazon Services LLC Associates Program, an affiliate advertising program designed to provide a means for us to earn fees by linking to Amazon.com and affiliated sites.

By subscribing to our Newsletter, you consent to receive exclusive content, blog updates and occasional promotional information by email.